Mauritius is a tropical paradise. Consequently it is a popular honeymoon choice and the perfect destination for those wanting to unwind on a beach. This does not sound like a destination I would have chosen for a trip. I get annoyed by staying on a beach for hours and I am surely not the person who would spend a lot of money on fancy resorts. However Mauritius was a stopover from the nearby Madagascar, in order for us to catch an Emirates flight back to Malta while we were on our honeymoon.

We had been in South Africa and Madagascar for over a month and relaxing in Mauritius sounded like a brilliant idea. Don’t worry we did not spend 3 days inside a resort, it would have been too boring for our tastes. Instead we rented a car and went beach hopping and visited the mountainous heart of the island. A tip for your accommodation – do not choose something at the northern or southern tip if you do not intend to change accommodation. We opted for a resort in Flic en Flac since it is more central and there is quite a good choice of accommodation in the area. 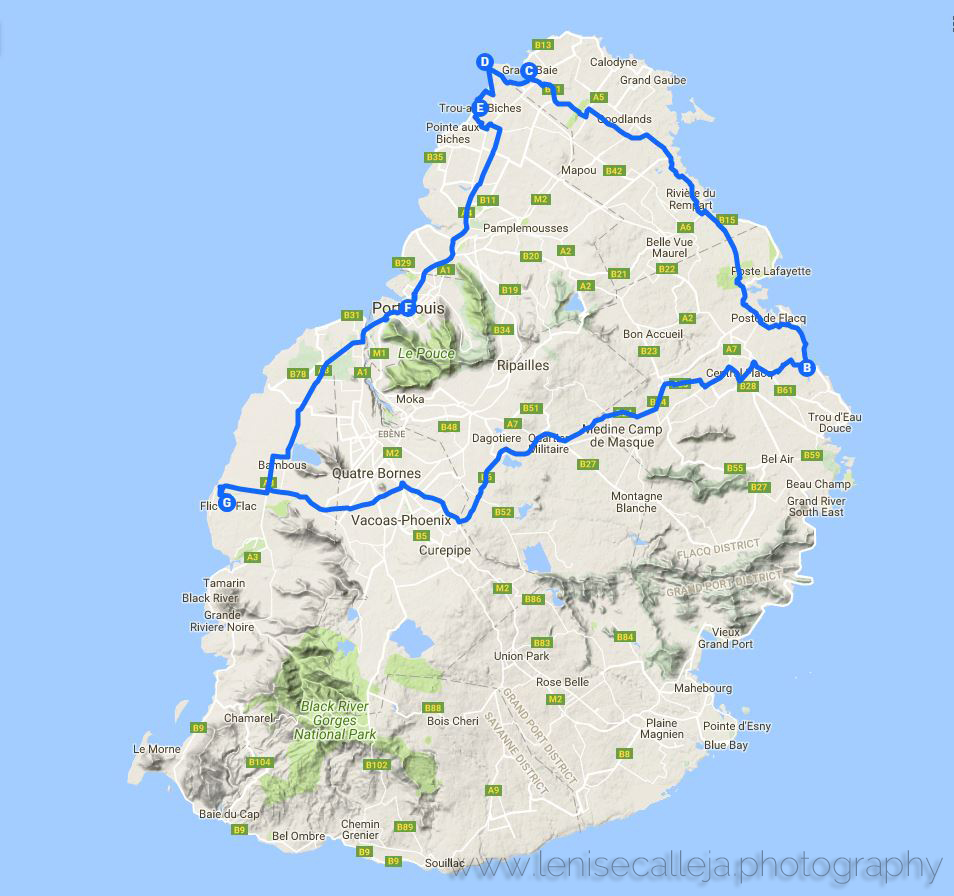 The main attractions of Mauritius are its beaches and although the central part is green and there are some mountains, your itinerary will most probably consist of driving from one beach to another. On day one we started by crossing to the East coast of the island. I wouldn’t suggest staying on the East coast as it is very windy and swimming here wouldn’t be that pleasant. We started by visiting Belle Mare and took a walk on the beach.

If you are interested in photography than going in the morning is the best option for better light conditions facing the beach. You can walk out towards the sea as it is very shallow and take some nice shots of the sandy beach. Or else you can spend a couple of hours swimming. Most parts of the coast is owned by the resorts however you can still walk in these areas.

Our next stop was the north towards Grande Baie. This area is very touristic and there are a lot of restaurants and bars on the beachfront. There are also a lot of excursions you can book from here mainly related to water sports. Next stops were Mont Choisy & Trou aux Biches however we were not able to find a parking here so we skipped them and went directly to Port Louis the capital of Mauritius. We spent a couple of hours here in the waterfront area and although the city is quite busy you can actually relax in the waterfront area. Two other stops you can add to this itinerary are Pamplemousses Botanical Gardens and the Waterfalls in Villa Eureka. I opted for the beautiful sunset directly from our resort in Flic en Flac and do not regret it! This is another reason to choose this area for your accommodation. 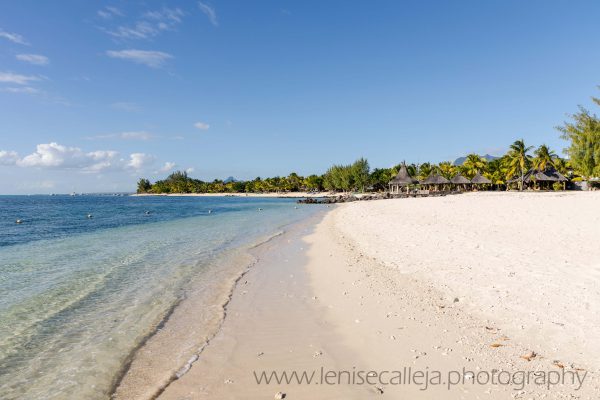 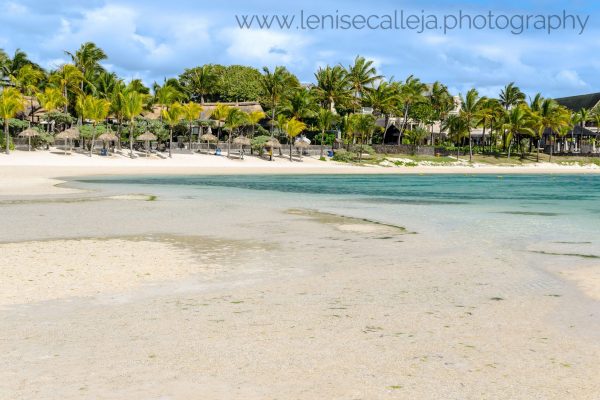 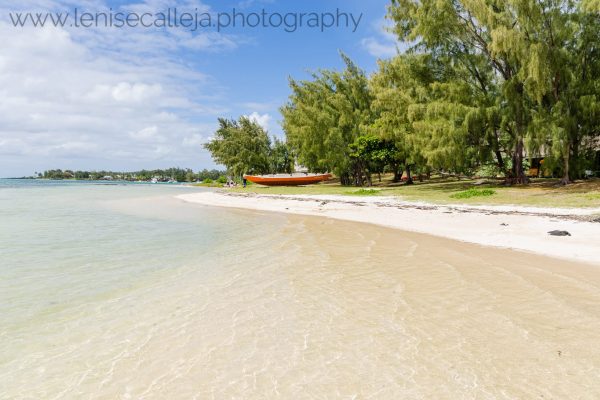 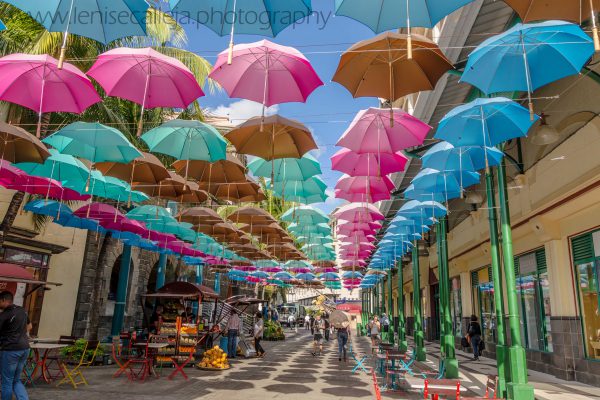 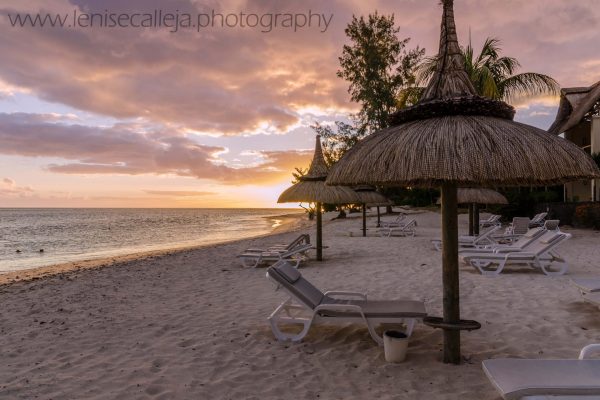 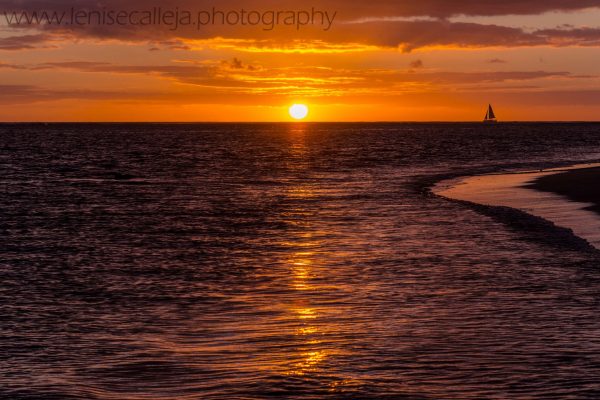 The weather was not very hot and we were not enough courageous to go snorkeling in Blue Bay which was our first stop for day 2. We just admired the bay and moved on to Rochester Falls. This was one of my favourite places in Mauritius. This waterfall is beautiful and there were a lot  of locals refreshing themselves in the cool water. This waterfall is in the woods and you will drive across the fields to get to it. As soon as we started driving offroad there was a man on a motorcycle who started following us. As soon as we parked near the waterfall he told us that this was private land and we had to pay something. I don’t remember the exact amount but it was not a lot and we just paid without arguing.

Next was the green heart of Mauritius where the Chamarel Waterfall and Seven Coloured Earth are located. To get to these locations we also drove across the Black River Gorges National Park and had some spectacular aerial views of the coast. This was definitely my favourite day! 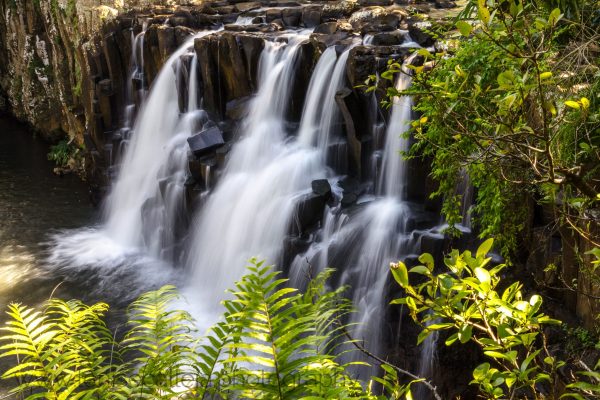 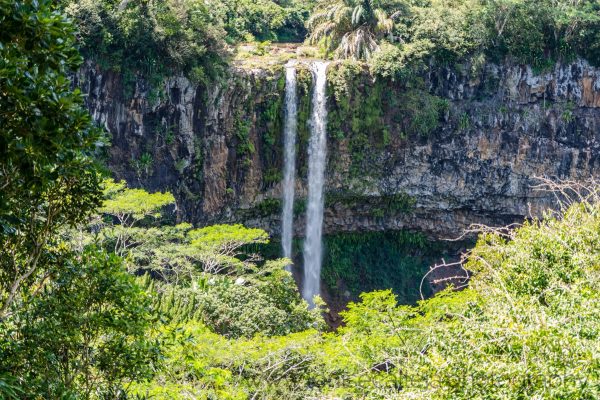 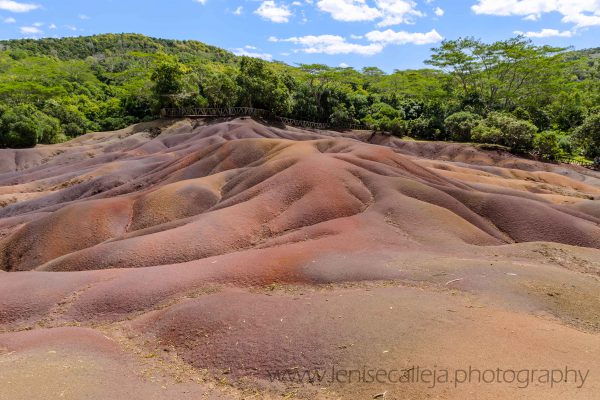 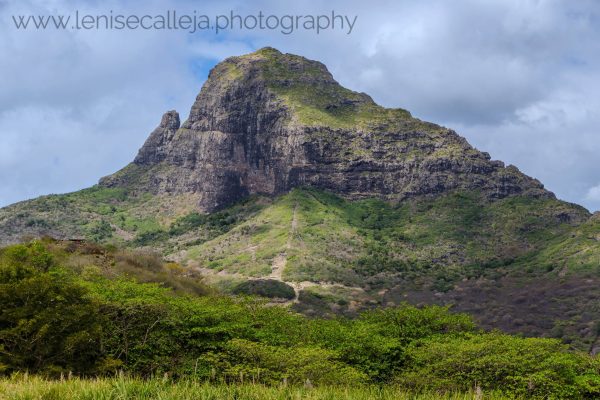 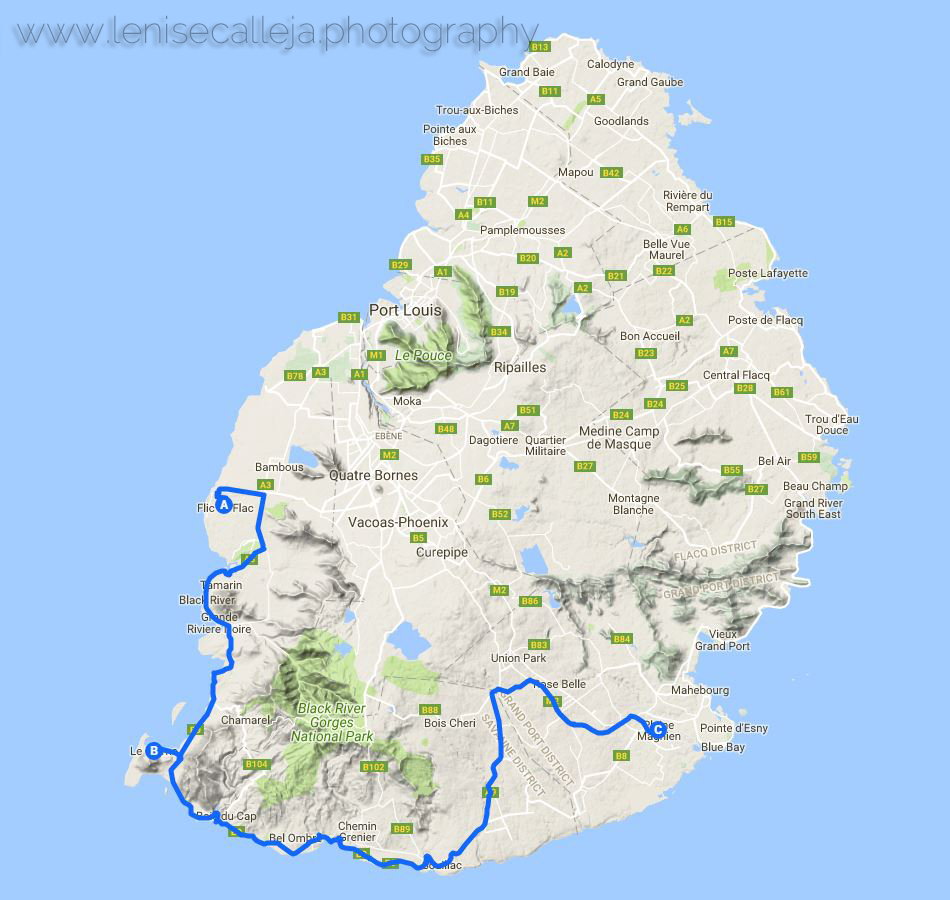 This was our last day in Mauritius after a month trip to Africa. Although we were quite tired we still had to make the most of it. We had a full day as our flight to Dubai was at night. We started with a long walk along the beach of Flic en Flac. This is where I found a cute small starfish skeleton on the shore that I could use for my do-it-yourself souvenir project. My house is scattered with this kind of souvenirs.

However I will write another blog post to describe better this project. Anyway after a stroll on the beach in the morning we left the resort and drove towards Le Morne. Finally it was hot enough to swim!  Although we were no longer able to shower we could not miss our last opportunity to dip in the warm waters of the Indian ocean. I admit that this was not the best idea I ever had. We were in for 17 hours of travelling afterwards, however I would do it all over again if I had the chance because the sea was amazing.

I previously described day 2 as my favourite day overall, however my favourite moment was still to come. It was unplanned and that can be the reason why I enjoyed it even more. During our days in Mauritius we had been meeting religious festivities all over the island. Mauritius’s main religion is Hindu and during these days they were celebrating the Ganesh Chaturthi.

While we were driving to the airport we ended up in the middle of the celebrations. All the people wore local costumes and the fulcrum of the celebration was reached when a group of people that were a couple of metres off the coast immersed a statue of Ganesha. There was a general commotion when the statues were immersed and everyone was clapping and singing to the music. I believe that moments like these help you understand better the local traditions and religious events. These moments are usually a highlight of my trip. 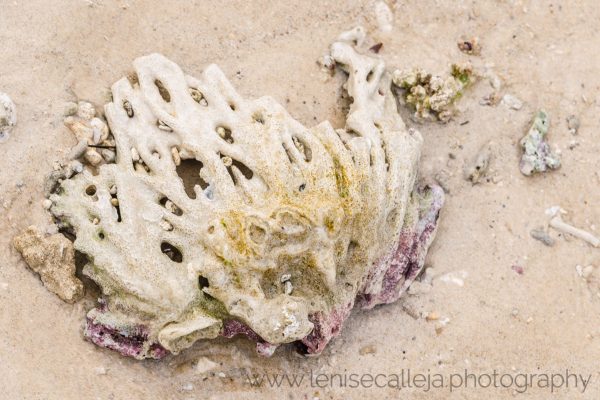 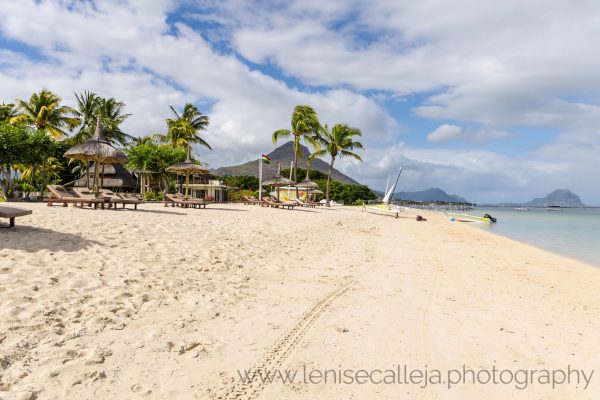 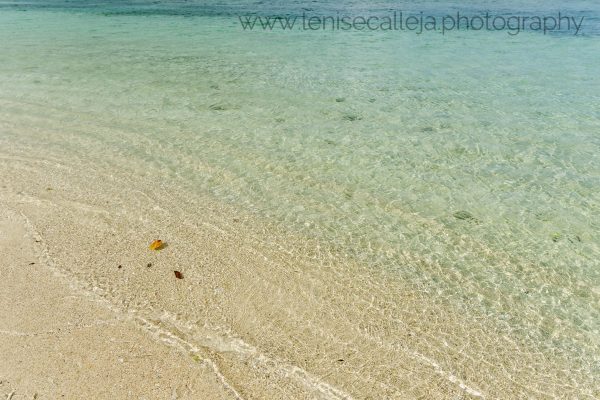 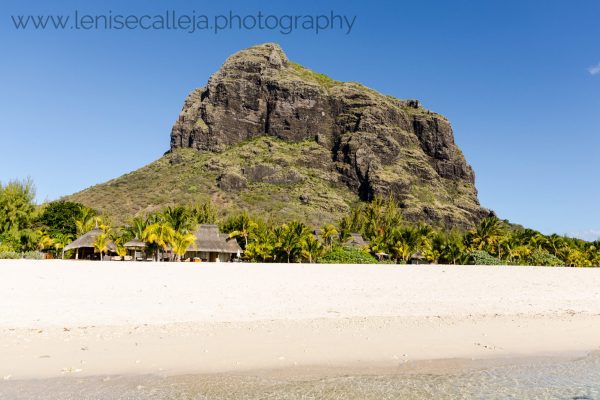 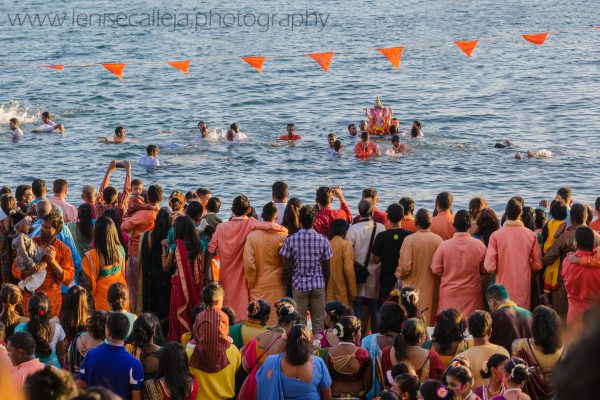 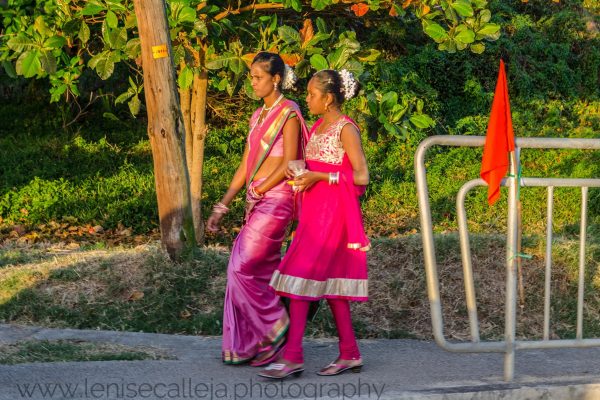 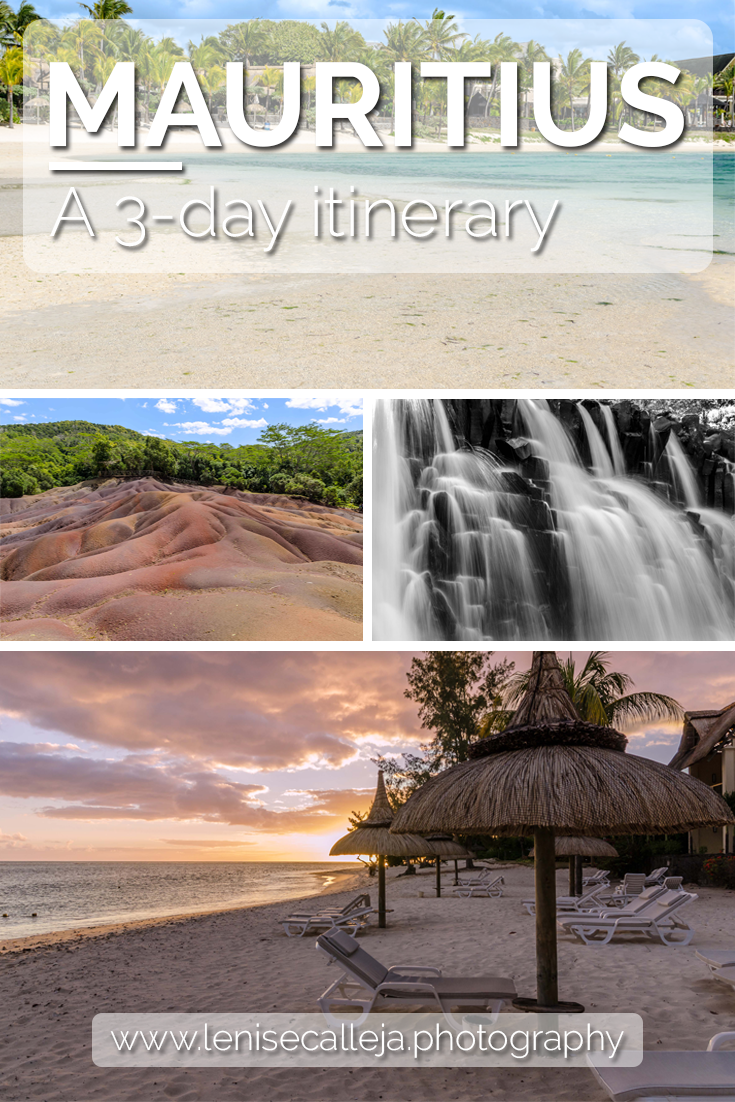 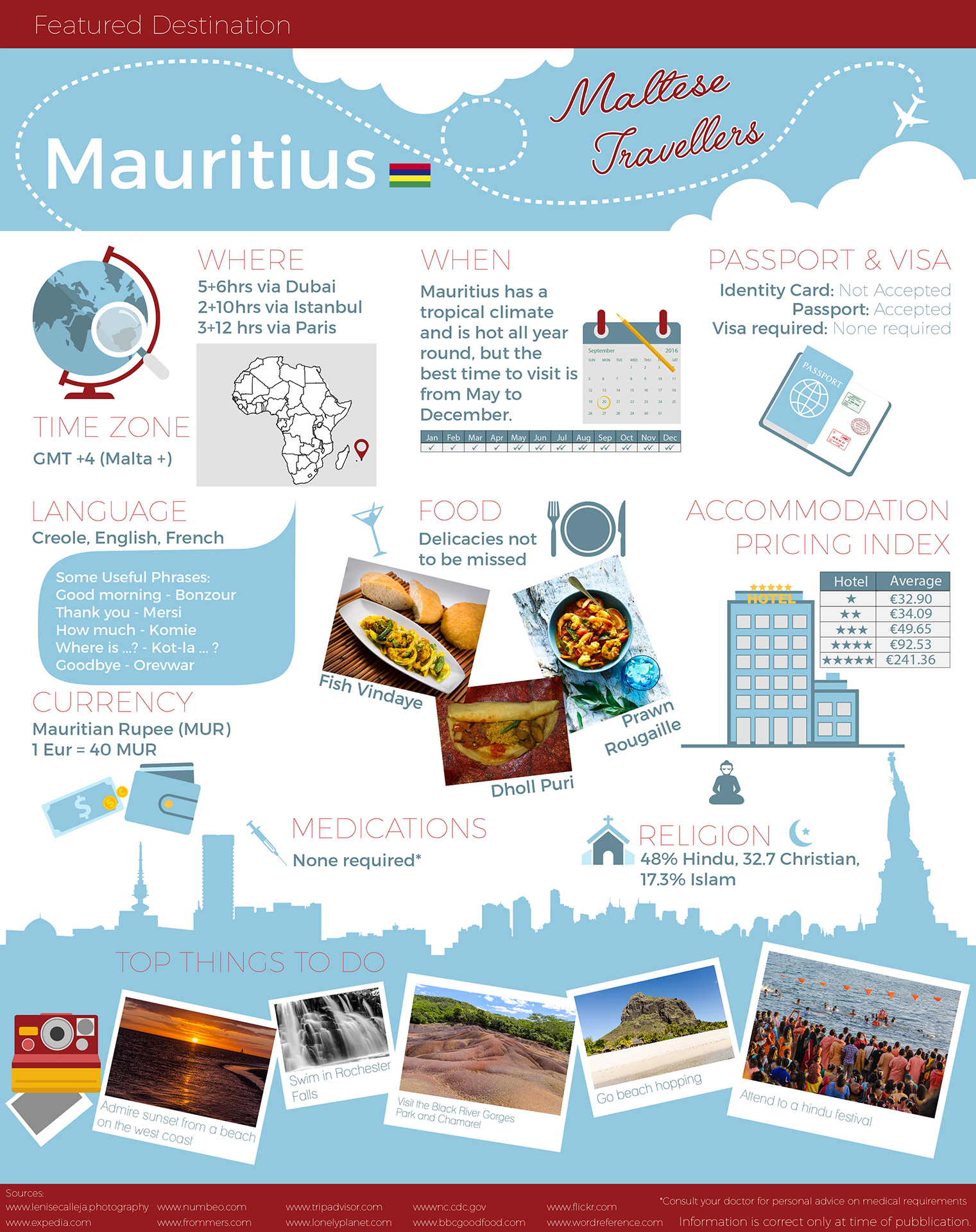 Getting out of the city: Milan

Getting out of the city: Milan